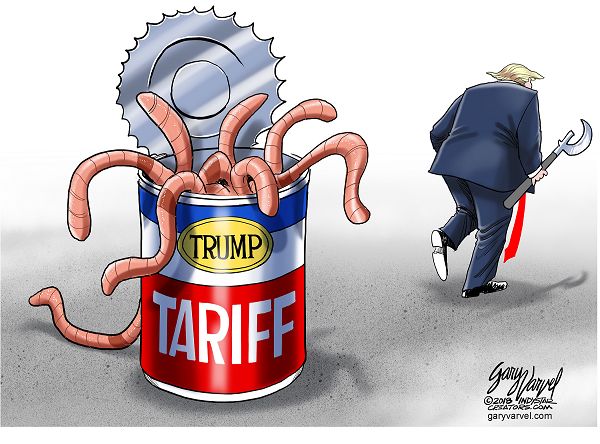 Seafood is Alaska’s biggest export by far and lawmakers are getting tough on trade policies that unfairly trounce global sales.

Two resolutions (SJR 16 and 17) were advanced last week by the House Fisheries Committee that address Russia’s ban on buying any U.S. foods since 2014, and punitive seafood tariffs by China since 2018. Meanwhile, the U.S. imports increasing amounts of seafood from both countries.

Both resolutions were introduced by Senator Gary Stevens (R-Kodiak) and “urge more attention” by Alaska’s federal team in Congress to restore pathways for fair trade.

“In order to remain competitive in the world seafood market, our Alaska seafood processors need some help from our partners federally. These resolutions would attempt to restore focus on negotiations with China to ease this tariff war that’s underway and level the playing field with Russia in favor of Alaska,” said Stevens’ aide Tim Lamkin at the hearing.

The heck with that, said a chorus of Fish Comm members who applauded the intent but said it doesn’t go far enough.

“Why aren’t we asking that we not import any Chinese or Russian fish? Why not turn the tables and put the embargo on them?” asked co-chair Louise Stutes (R-Kodiak).

“I can tell you it is frustrating when we go into a grocery store here in the U.S. and see Russian seafood products sold at a much lower rate. We hear it from the processors we work with, we hear it from the fishermen,” said Jeremy Woodrow, director of the Alaska Seafood Marketing Institute.

In any given year, between 75% and 80% of Alaska seafood by volume is exported,” he explained, calling it “vital to the economic health of Alaska’s communities and its seafood industry that we can remain competitive in a global marketplace.”

“Think crab, pollock, wild salmon, halibut and cod – Russia competes with Alaska’s commercially harvested seafood across the global market. And their products are imported and sold at a lower cost, and therefore undercut the value of Alaska seafood products in our most valuable market, the United States,” Woodrow continued. “And since 2014, the U.S. has seen Russian seafood imports increased by 173%.”

Switching to China, the ongoing trade war since 2018 has increased tariffs as high as 37% to 42% on U.S. seafood entering that country. Overall, the U.S. market share of sales is down 63% while Chinese imports to the U.S. have doubled and increased by 91% in value.

“The Alaska seafood industry invested over 20 years developing the China market for reprocessing and domestic consumption and grew that into our number one export market reaching nearly $1 billion in 2017. The retaliatory tariffs in 2018 have dropped exports to China to record lows,” Woodrow said.

“The challenges have been amplified over the course of the Covid pandemic further stressing the need for fair and balanced foreign trade,” he added. “Alaska has seen its export values decline considerably due to shipping disruptions, escalating costs, border closures and rolling closures of markets. Compared to 2019, exports in 2020 were down $500 million, and approximately $300 million in 2021.”

One of the hardest hits has been taken by Alaska pollock, the nation’s largest food fishery, which faces a 500% higher tariff rate than competing Russian pollock going to China.

“It is my belief that the economic and social well-being of Alaska’s coastal communities and the entire life of our industry rise and fall together,” said Stephanie Madsen, director of the At-Sea Processors Association who called the retaliatory tariffs “crippling” and the nearly 7-year Russia embargo “outrageous.”

“The Alaska seafood industry is proud to serve American consumers, but the truth is the sheer size and scale of Alaska’s fisheries means our economic survival is heavily dependent on secure and fair access to key export markets,” Madsen said. “Fair international trade, in turn, increases seafood prices, provides greater revenues to harvesters and promotes economic activity and security to communities throughout our state. Unfortunately, changing international trade rules have reduced our competitiveness in some markets and completely cut off our access to others.”

Adding to the slam is the way that Alaska seafood is completely snubbed in U.S. trade documents, pointed out Rep. Kevin McCabe (R-Big Lake).

“I was furious,” McCabe said, referring to the U.S. Trade Representative website. “Seafood is our shining star. It’s our number one export and has been for decades and it is not even mentioned! It’s causing the Chinese and Russians to disregard us. I am aghast and dismayed at the USTR poor representation of what Alaska does for the country and the world.”

The Fisheries Committee advanced the China resolution (SJR17) asking for “renewed focus on the plight of U.S. seafood producers,” but added tougher talk for Russia (SJR16).

“I do not want to sign my name to a resolution that is asking pretty please to get Russia to stop what they’re doing,” said Rep. Sarah Vance (R-Homer). “I think that puts us in a position of weakness, asking nicely to change something when we are in the position to say no. We can’t stop other imports but we could at least prioritize U.S. fish, specifically Alaskan fish.”

The Russia resolution was amended from asking President Biden “to immediately seek and secure an end to the embargo” by adding “or place a reciprocal embargo on Russian seafoods entering the U.S., until a reasonable trade agreement restoring Alaska seafood producers’ full access to Russia’s domestic seafood market is secured.”

The resolutions must be passed by the Alaska legislature before they are sent to Washington, D.C.